Tourism is one of the largest, fastest growing and most important industries in the world.

It plays a role in distributing wealth between MEDC & LEDC countries and offers jobs/an income to millions of people with limited skills and education.

Tourist: Someone who travels somewhere for pleasure on short term basis.

Environmental: places with unique very attractive environments/landscapes attract many people. Safaris in National Parks such as the Serrengeti, Tanzania, East Africa are an example.

Cultural: countries with strong cultures such as Guatamala attract many visitors whow ish to see and experience it.

Relaxing: beach resorts can be found globally and are very popular as tourists want to soak up the sun, swim in the sea & pools and fdorget about the daily routine at home.

Medical: increasing numbers of people travel to other countries to take advantage of high quality but much cheaoer medial services. Many Amercican & Canadians travel & stay in Costa Rica for medical purposes.

Causes of Increases in Tourism

Rising disposable incomes: over the last 50 years people in developed countries have had increasing amounts of spare money to spend on holidays. This is now occuring in some NICs such as India, Brazil and China.

Rising populations: there are more people in the world and subseuquently more people to take holidays.

Holiday Allowance: people generally are entitled to more holidays from work, in Europe the standard is 4 weeks.

Cheaper & faster transport: the real cost of flying has fallen considerbly and it is affordable for many more people. transportation has also got much faster (flights, cars, trains) which has made destinations seem much closer.

Exploration: initial discovery of a destination by a few more adventourous tourists. Likely to be very few tourist facilities.

Consolidation: the destination is dominated by tourism at this point and the economy and is still growing. Services and supplies for the local population may suffer.

Decline or Rejuvenation: Destinations face declining arrivals if the resort continues to become run down & less attractive. This oftn leads to loss of jobs and increases in crime. Resorts may invest in regeneration and cleaning up the environment to attract new tourist again and revive the industry. 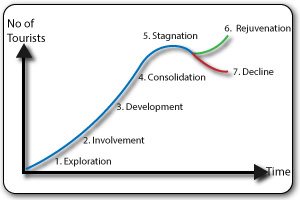 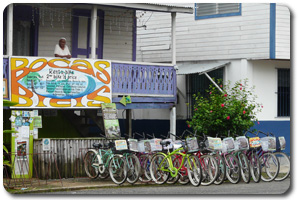 Tourism has been rapidly expanding in most areas of the world. Rising levels of disposable income in MEDCs and an emerging middle class in the NICs have led to many more people travelling.

The cost of air travel has also been falling in real terms over the last few decades as planes become much more efficient and airlines save costs through utilising technology (e-tickets, self service check in etc). This has brought financial benefits for tourist destinations.

Many LEDCs have been able to promote and exploit their natural landscapes and wildlife, from safaris in Tanzania and Kenya, Gorilla trekking in Rwanda, to rainforest trekking in Costa Rica and glacier tours in Argentina. Other countries have relied on historical and cultural attractions such as Mexico and Egypt with their pyramids, Laos with the Angkor Watt temples, Peru with the Inca ruins of Machu Pichu.

These countries have been able to attract large numbers of tourists and generate significant amounts of foreign earnings. The tourism industry employs a whole range of people and many of them are relatively unskilled - bus drivers, taxi drivers, waiters, bar staff, cleaners, tour guides and so on. Tourism can create a multiplier effect in the economy and be a good driver of growth. Tourist resorts have sprung up rapidly where there is demand, many of them being owned by MNC hotel chains. While they generate significant income they also bring a raft of problems such as loss of culture, profits being repatriated to the home country of the hotel, environmental degradation and overcrowding of the local places.

Economies that are heavily reliant on tourism face many potential difficulties. Any negative occurrence in the country can dissuade tourisms from coming (the recent troubles in Egypt have decimated its tourist trade). Economic slowdowns in other parts of the world can cause a significant drop in the number of tourist (the recent economic crisis has seen tourists from Europe plummet). Rises in the countries exchange rate can make it comparably more expensive than rival destinations and result in many people choosing not to come.