Definition: The theoretical measurement of the amount of land and water a population requires to produce the resources it consumes and to absorb its waste under prevailing technology.

There are vast disparities in countries ecological footprints (measured in global hectares). Fossil fuel consumption is a major factor for most countries since many developed economies rely heavily on oil and gas for transportation, heating and electricity generation.

Developed countries tend to have high per capita energy consumption due to the levels of car ownership and devices in homes (TVs, dishwashers, ovens, air conditioning etc).

Underpopulation: when there are not enough people to make full use of the resources and technology of the place they live in.

Canada can be considered underpopulated because it could increase its population but still have a high standard of living. Canada exports food, oil and water.

Overpopulation: an area that experiences decreasing standards of living due to population growth. Resources are being spread more thinly between the people (food, jobs, technology, services, energy).

Rwanda is a good example of a country that became over populated and conflict led to a very violent civil war which suddenly decreased the population.

Optimum population: the level of population at which the resources are most effectively exploited to give a high standard of living.

Advances in technoogy often allow us to use resources more efficiently or extract previously unrecovarable resources - so the optimum population level is dynamic and is likely to change over time. 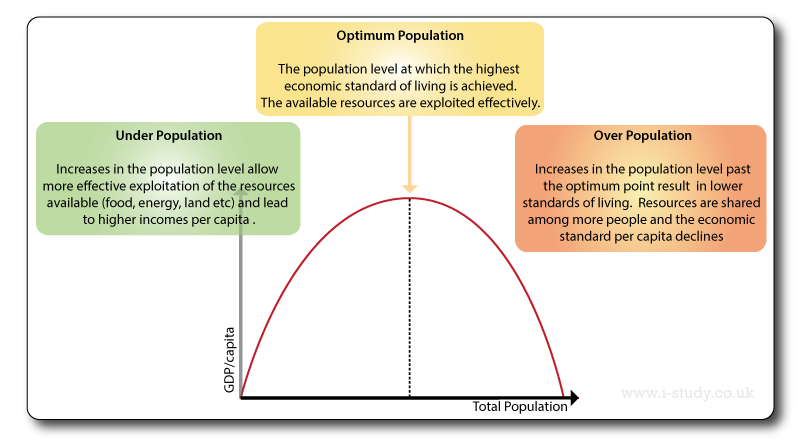 Malthus argued that population growth would outstrip the rate at which humans could increase food production. This would eventually lead to situations in which food resources became scarce and ultimately lead to an event that would reduce the population level - a war (over resources), disease or a famine. He called these population reductions 'checks'.

The main limitations of his theory are based on his assumption that the main way to increase food supplies was through farming more land. This has proved to be unfounded as technology and machinery have vastly increased the yields of food that we can produce from a given area of land. Developmnents such as the green revolution have vastly increased global food production.

Club of Rome - these argue that we cant keep increasing the food supply and that the green revolution is unlikely to be repeated.

In fact in many places soil degradation and increasing freshwater scarcity are going to make increasing the food supply much more difficult.

Boserup - these argue that we will find ways to increase food production to meet the needs of increasing populations. That scarcity will drive inovation and new technologies to allow continued population growth.

Homework: Explain how & why Easter Island can be used to exemplify the theory of Malthus.

The last century witnessed the world become increasingly dependent on oil. Food production, industry, transport, plastics all depend on oil in one way or another.

Consider the role of oil in our modern way of life and the impact that it is having on the environment.

Shale gas and oil offer the potential of vast new fossil fuel reserves that can be extracted. The exploitation of these reserves in the USA has enabled it to become a net energy exporter aswell as reducing the price of electricity.

1) UK & Argentine tensions are increasing over who has the rights to oil reserve in the Falkland Islands.

Read this article & make notes about the reason for the conflict

Levis have made significant progress in reducing the resources used in the production of their jeans. Manufacturing jeans has traditionally used large quantities onf water, not just in the fabric prouction but also the dying processes.

Use figures 4. and 4. aswell as the links below links to make case study notes.

You are required to evaluate a strategy to conserve a resource at a local or national scale:

The public water utility company Acosol has made a firm commitment to sustainable tourism and respect for the environment. Its key initiatives include providing recycled water for the irrigation of golf courses and garden areas, operating a desalinisation plant and linking up river basins and resoviours to balance water extraction.